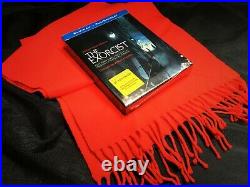 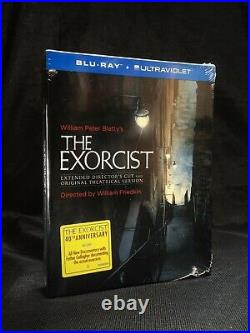 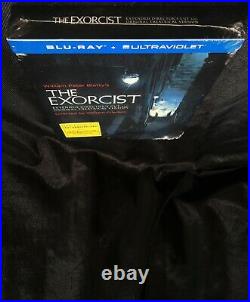 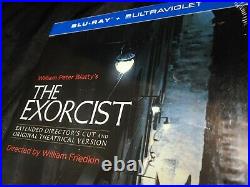 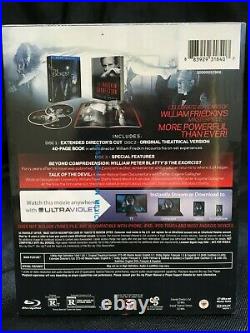 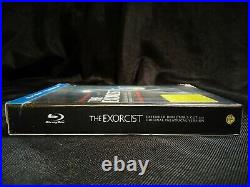 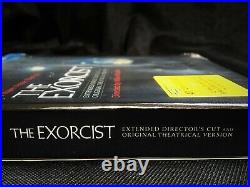 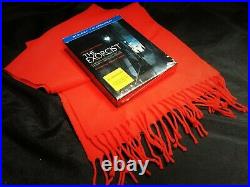 ARE YOU SEEING STRANGE THINGS? ARE YOU HEARING STRANGE NOISES? GALLERY PHOTOS REPRESENT the ACTUAL ITEM. William Friedkin's 1973 adaptation of William Peter Blatty's novel, The Exorcist is one of the most notorious and controversial films ever made. Nominated for ten Academy Awards (including Best Picture, the first horror film to do so) and winning two Oscars for Best Screenplay and Sound, The Exorcist remains the top grossing R-rated movie of all time. Certainly it is the scariest, according to Entertainment Weekly, Maxim, Movies. Com, Variety, AFI, and Roger Ebert. The Exorcist (premiering 26 December 1973) still haunts our imaginations and nightly dreams, along with influencing a new generation of directors, including Guillermo del Toro, M. Night Shyamalan, and James Wan.

Distributed by Warner Home Video. In time for the 40th anniversary of The Exorcist, Warner Brothers has released a brand new Blu-ray that's home to a couple of new extras, an ever so slight improvement on the video clarity (which was barely enough to even notice really), and an excerpt from William Friedkin's book The Friedkin Connection: A Memoir. So minimal are the differences that it seemed kind of silly to write an all new review so we've taken our review from the 2010 release and used it as a skeleton for this one. They don't make'em like they used to.

That's particularly true of The Exorcist. Watching William Friedkin's masterpiece in all its Blu-ray perfection really makes you realize how far the horror genre has fallen. There is absolutely no way this kind of classy character-driven movie would get made in the Hollywood system today. It would be quickly cast into the development hell abyss with all the great unrealized horror films to pave the way for more formulaic bullshit catering to the same demographic-namely, all those stupid teens who still call this movie "boring" while laughing at little Regan shouting curse words.

There's nothing you can say about The Exorcist that hasn't already been stated, examined, and dissected two ways from Sunday. It's irrefutably one of the greatest and most influential horror films of all time, and if you haven't seen it, you're probably not reading this website. Even more remarkable is how it hasn't aged one bit; it's still every bit as effective today as it was 40 years!

Included in the set are both the theatrical and the "Version You've Never Seen" cuts. Compared to the Star Wars: Special Editions or the Apocalypse Now Redux, the differences between the two are fairly minimal (although I tend to prefer the spider walk sequence and extra character bits in the longer cut) so you'll be watching a masterpiece no matter what you pick. Both presentations look and sound pitch-perfect. This 1080p treatment of The Exorcist looks a hell of a lot better than any of the previous DVD releases. For the most part the image remains on the soft side of the fence and there's a lot of film grain present throughout the feature but the level of detail presented here is still incredible despite the softness of the image. Blacks are rich and deep, there's no DNR scrubbing to be found here, and there are almost no scratches and flecks present. It should be noted that the extended cut is home to a DTS-HD 6.1 Master Audio track, while the theatrical version offers a DTS-HD 5.1 Master Audio track. The differences between the two are minimal at best, but it's nice to know the effort was there, no? For this new addition Warner Bros. Has cleaned up the image a bit more by removing some of the extremely minor defects found in the original 2010 Blu-ray such as some crushing in the film's black levels and some inconsistent contrast leveling. Again, you really wouldn't notice unless you were looking for them. Now let's cut to the chase: Bonus Content! The material created exclusively for Blu-ray isn't particularly inspired.

The 30-minute Raising Hell: Filming the Exorcist documentary reunites most of the cast and crew and uncovers some great on-set footage (particularly when it comes to the special effects) but doesn't really give us any new information. Even more maddening is how the interviewees bombard us with numerous comments on why The Exorcist isn't a horror movie. " This kind of smug Hollywood talk is really getting old and it's amazing what people will say to avoid the dreaded "H" word "It's a psychological thriller. It's a supernatural detective story!

If you've made what is widely considered the greatest horror film of all time, embrace it; don't sit there and make excuses. Also included are two lightning quick featurettes: The Exorcist Locations: Then & Now and Faces of Evil: The Different Versions of The Exorcist, which are pretty self-explanatory. The real crown jewel remains the feature-length making-of BBC doc The Fear of God, which tells you everything you could possibly want to know about The Exorcist. Commentaries, storyboards, interviews, and TV spots seen on the previous DVDs round out this set, and while the new material is ho-hum, it's great to have all the archival stuff together in a high-def package.

In terms of what's new other than the book excerpt, you're getting two new featurettes, Beyond Comprehension: William Peter Blatty's The Exorcist and Talk of the Devil, which clock in at about 47 minutes combined. You can read a synopsis of each below. Having something new is nice, but these are far from earth-shattering. Bottom line: If you're a horror fan, The Exorcist on Blu-ray is a no-brainer.

The amazing high-def presentation packs enough power to pump you full of good old-fashioned religious fear. If you already own the 2010 Blu-ray, this baby is kind of hard to recommend. However, if you're a raging maniac like myself, there's a good possibility that this is already sitting proudly on your shelf. You cannot go wrong either way though the need to double dip is truly suspect. First stop is a cabin/guest house in the hills of Encino, California, where Blatty wrote the novel.

The author visits the place for the first time in 40 years and shares not only memories of writing the book, but also discusses how it inspired him. We then meet Blatty in two key and iconic locations; Georgetown University where the film was shot, and at the now-famous Exorcist steps. Throughout, Blatty reads from his novel, including an excerpt from a chilling newly published passage. Talk of the Devil (NEW) - While at Georgetown University, William Peter Blatty heard about a true case of possession from Father Eugene Gallagher.

At the time the film came out, the priest talked at length about exorcism, the true story and about Blatty; this footage is now available for the first time in many years. It is as revealing as it is shocking. Two Commentaries by William Friedkin. Commentary by William Peter Blatty.