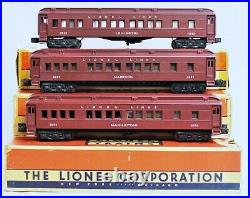 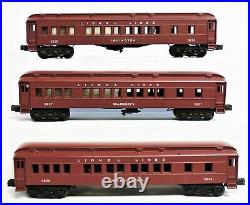 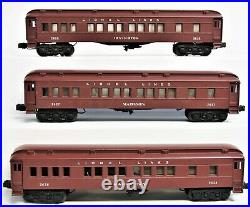 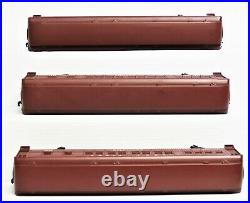 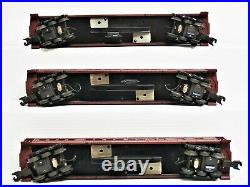 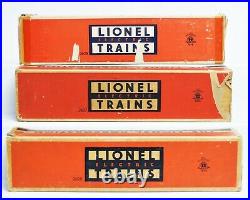 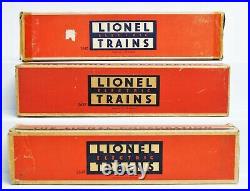 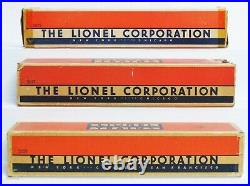 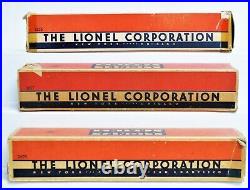 AN EXTREMELY NICE, COLLECTOR QUALITY. SET OF 2625, 2627, AND 2628 "MADISON" CARS. I WOULD GRADE THEM C-8 TO C9; BUT STUDY THE PICTURES AND MAKE YOUR OWN JUDGEMENT OF CONDITION AND GRADE. Being 1949 production, they have taped coupler coils, light wires through the light mounts, and no people in the window inserts. Some of the window inserts are missing. The Madison and Irvington cars each are missing one, and the Manhattan car is missing three. They have no rust or cracks and only a couple of very minor paint chips on each car. The only chip of any note is on the lower roof of the 2628 and shows in the second picture.

The paint color matches very well on all of the cars. There are some paint defects on the bottom edges of the bodies, but I have seen these on a number of the 2625, 2627, and 2628s I have had in the past.

I have read that these are caused by the drying fixtures that they were placed on after painting at the factory. There is no rust on any of the plated or blackened parts. They have every part that they left the factory with including the light bulbs and wiring and no replacement or repro parts.

The insulation on the light wires is brittle and should be replaced if the purchaser is going to run them. The boxes, like quite a few Madison car boxes, are a little rough, but they all have original inserts. Check the pictures closely to see the defects. The 2625 box has both end flaps, that have been re-attached. It has one side flap. It is a two-city box and is lighter in color than the other two.

BOXES" is in sale since Tuesday, June 15, 2021. This item is in the category "Toys & Hobbies\Model Railroads & Trains\O Scale\Passenger Cars". The seller is "bcia" and is located in Bennington, Nebraska.

This item can be shipped to United States, Canada.